Taking the RCE Water Resources Program on the Road 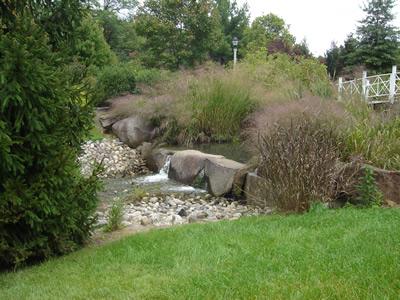 The Rutgers Cooperative Extension (RCE) Water Resources Program has long shared its work on the international stage through presentations to foreign delegations visiting the United States.  These presentations recently resulted in an invitation for Christopher Obropta, professor of environmental science and the RCE extension specialist in water resources, to visit Taipei, Taiwan and share information about Water Resources Program efforts in designing and implementing community-based green infrastructure.

Obropta and Zack Chen, a Water Resources Program engineering technician, spent seven days in November 2019 as the guests of Taiwan Environmental Protection Agency (EPA).They toured Taipei and its surrounding areas to see the green infrastructure and other environmental features that have been installed by the Taiwan government.

Taiwan recently began to adopt a Sponge City concept to address its urban stormwater problems. Originating in Beijing, China, the Sponge City concept was created to reduce polluted runoff by facilitating the eco-friendly collection, absorption, cleansing and use of stormwater. In the process, flooding is minimized, water quality improved, and green recreational spaces are created.

Taipei’s main green infrastructure demonstration project was among the visited sites. The Sponge City concept project, which is installed at the city’s largest wastewater treatment plant, includes porous asphalt, a rain garden, a rainwater harvesting system, and grass pavers. After the two-day tour, Obropta gave a presentation to the Deputy Directors and Senior Administrators of the Taiwan EPA.

The work in Taiwan is very similar to efforts made by the Rutgers Water Resources Programs to incorporate green infrastructure New Jersey cities. While Taiwan is trying to install large green infrastructure projects as part of its Sponge City concept, there was interest in our community-based approach of installing many small projects to produce a cumulative positive effect of reducing the negative impacts of stormwater runoff.

While in Taipei, Obropta also presented at the two-day 2019 Water Environmental Symposium hosted by the National Taipei University of Technology, which also featured presentations by university faculty from China and Japan.

“Perhaps the most interesting component of the Taiwanese Sponge City concept is its ability to combine gray and green infrastructure, not only to manage smaller storm events, but also to reduce flooding impacts from typhoons that can dump several feet of rain over the course of a single day,” says Obropta.

Ultimately, this model could help the United States manage runoff from the catastrophic hurricanes, northeasters, and 100-year storms that are occurring more frequently due to climate change.

“Our hope is that the RCE Water Resources Program will continue to work with our colleagues in Taiwan to better understand the Sponge City concept and possibly adapt components of their model to help the United States become more climate resilient,” adds Obropta.